Meet and assist at Queen Alia Airport, our representative to assist clients through formalities and luggage collection, transfer to your hotel in Amman, overnight

Breakfast, morning visit of Jerash; The Greco -Roman city of Jerash (Gerasa in ancient times), This ancient city of Jerash is remarkable for its unbroken chain of human occupation, The city's golden age came under Roman rule and the site is now generally acknowledged to be one of the best preserved Roman provincial towns in the world, Jerash reveals a fine example of the grand, formal provincial Roman urbanism that is found throughout the Middle East, comprising paved and colonnaded streets, soaring hilltop temples, handsome theatres, spacious public squares and plazas, baths, fountains and city walls pierced by towers and gates, after that we drive back to Amman; Amman is the capital city of Jordan. In the thirteenth century Amman was called Rabbath Ammon by the Ammonites. The Greeks called it Philadelphia, a visit to the Roman Amphitheatre: is considered one of the largest in the Middle East, Amman Citadel: Is located 132 meter of the level of the City Centre. South of the castle we can

still see the ruins of Hercules temple, also there is an Umayyad palace, transfer to hotel in Amman, overnight.

Breakfast, proceed to visit Madaba; The city of finest collections of Byzantine mosaics, many fine examples of which are well preserved, Several church floor mosaics can be seen in their original locations, Madaba’s real masterpiece, in the Orthodox Church of Saint George, is the 6th century AD mosaic map of Jerusalem and the Holy Land – the earliest religious map of the Holy Land in any form to survive from antiquity, then visit Mt. Nebo; the place where Moses gazed at the Promised Land before

he died and believed to be his burial place. You visit the old monastery; overlook the Jordan Valley, Dead Sea, Jericho and Jerusalem, drive to visit Kerak Castle; one of the most important Crusader Castles in the region, drive to hotel in Petra, dinner and overnight.

Breakfast; today visit the red rose city Petra, the biggest attraction of Jordan. Petra was first established around the 6th century B.C. by the Nabatean Arabs, a nomadic tribe who settled in the area and founded a commercial empire, you can start the trip on horseback or by foot to the canyon, the so called Siq, and then walk to the most beautiful monument: the Treasury, from here we explore the city to see the Street of Facades, the Royal Tombs and Pharaoh's Castle, transfer to Petra for dinner and overnight.

Breakfast, drive southern this morning to Wadi Rum, a moonscape terrain of ancient river beds, wind-sculpted mountains, vast desert vistas and smooth, pastel-colored sands. You will meet long skirted legionnaires offering cardamom-spiced coffee at the "Beau Geste" outpost. Enjoy with 02 hours jeep tour at this oasis home to the film "Lawrence of Arabia." A truly “out of this world” experience! Then drive to Dead Sea hotel for dinner and overnight. 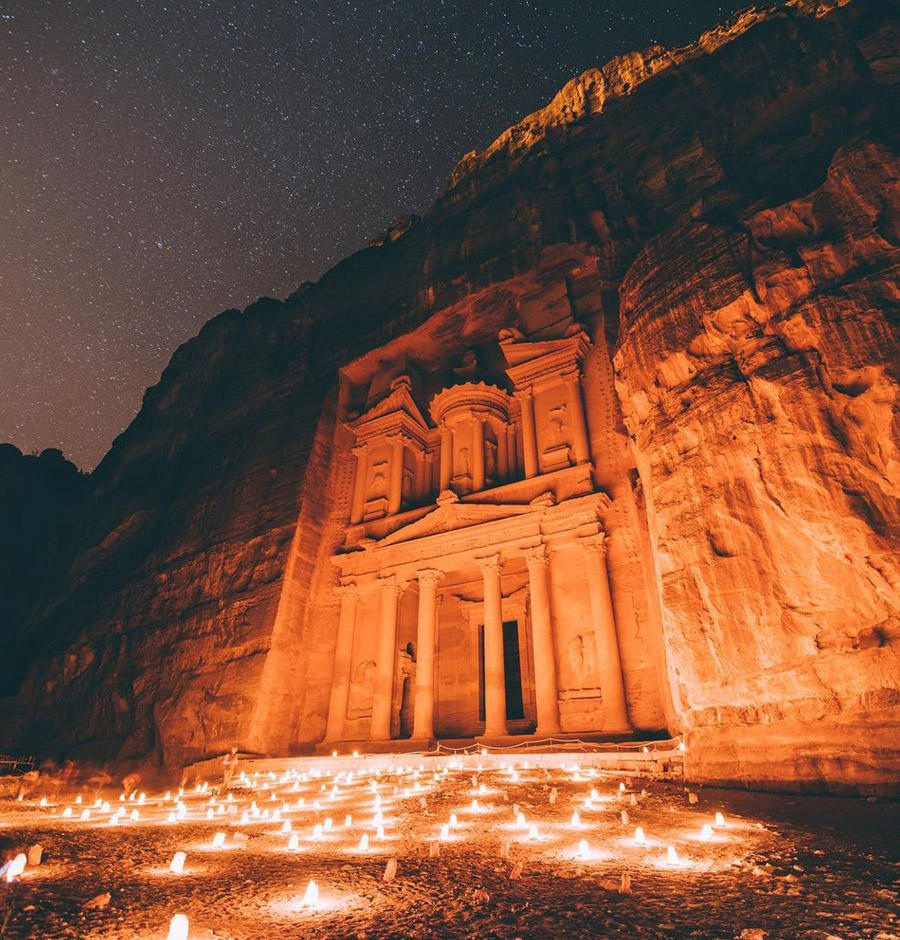