Meeting at the airport. Transfer to hotel. Overnight.

Breakfast. Panoramic city tour in the capital of Ukraine and the cradle of Eastern Slavonic states. The tour includes Golden Gates and Vladimir’s hill, which is supposed to be the place of foundation of Kyiv-city, Bogdan Khmelnitsky’s Monument, National Opera and Ballet Theater, St. Vladimir’s Cathedral - a splendid architectural pearl, with beautiful paintings of V. Vasnetsov and St. Michael’s Golden Domed Monastery founded in 1108, Kyiv Founders’ Monument, Khreschatik Avenue, Independence Square - the scene of many notable events in the capital city of Ukraine.

Visiting St. Sofia Cathedral (optional) - the world famous historical and architectural monument of the first half of the 11th century. The cathedral is famous for its mosaics and frescos by Byzantine masters. It is the first monument in Ukraine listed as a UNESCO World Heritage Site.

Visiting The Holy Kyiv Pechersk Lavra - the Orthodox Christian monastery that is the holiest place of pilgrimage in Ukraine. It was founded in times of Yaroslav the Wise in XI century and is one of the most ancient monasteries in Old Rus. Trinity Church, the Assumption Cathedral (renovated in 2000), the Refectory Church and the labyrinth of the Near and Far Caves, with their relics of saints, are real masterpieces of world architecture.

Free time. In the evening Cruise over the Dnipro river (optional). Overnight.

Breakfast. Transfer to Folk Architecture Museum Pirogovo - the biggest open air museum in Europe which offers a great collection of our national ethnographical heritage. There are approximately 300 unique objects of folk architecture, dating back to XVI−XX centuries from all the regions of Ukraine. During the visit you will see unique collections: windmills, watermills, forges, an old traditional sauna, village administration houses, a church school, a priest mansion, cafes named “shynok”, huts, barns, stalls, cellars etc. Transfer to railway station. Departure to Lviv by the high speed train in the 2nd class (17:34-22:40). Arrival to Lviv. Hotel accommodation. Overnight.

Breakfast. Lviv is a very beautiful city with its narrow medieval streets paved with stones, architectural decoration done in different styles preserved in its original form. This is an ancient picturesque city founded by Prince Danylo Halystky in the middle of the 13th century.  During the panoramic tour you will have an oportunity to admire St. George Cathedral (1765) in baroque-rococo style with unusual ornamental entry, National University Ivan Franco - one among the oldest in Europe founded in 1661, High Castle from where you can enjoy the whole panoramic view of the city and surroundings beyond.

Excursion in the ancient part of the town (pedestrian). You will walk through the cozy streets of Lviv where each building is an architectural masterpiece with a rich history. You will discover The Opera House (1900) - an architectural masterpiece with gorgeous paintings and sculptures in the interior; Taras Shevchenko’s monument; Rynok square (16th century) - the heart of the city listed by UNESCO World Heritage Site; Armenian quarter with a splendid Armenian Virgin Mary’s Dormition Church (1370), Dominican Cathedral (1798); Baroque style Jesuit Cahedral; the Latin Cathedral and the Transfiguration Church; Jewish quarter with the remains of the Golden Rose synagogue; etc. Free time. Overnight.

Breakfast. Free time or optional visiting. Transfer to the airport for your flight back home. 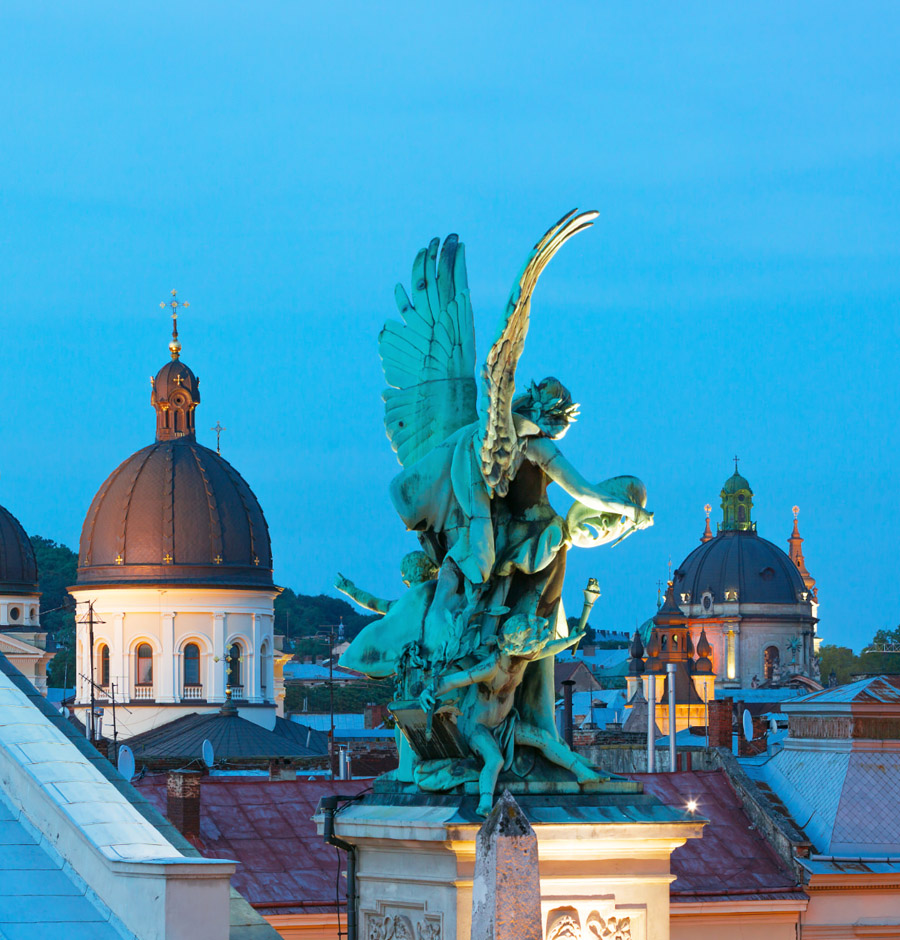