This city tour will introduce you to the the most important sights of the Austrian capital. As we drive around the famous 'Ringstrasse', Vienna's main boulevard, we pass by the State Opera, the Museums of Fine Art and Natural History, the Parliament building, the Burgtheater (National Theatre), the City Hall and the University. The highlight of this programme is the visit to Schonbrunn Palace where we take a tour of some of the most magnificently decorated rooms. We return to the city centre, passing by Belvedere Palace, where you will have the opportunity to end your tour, or you can choose to continue to the State Opera House, where the tour ends.

Stroll through Mozart's Salzburg and take a closer look at the main sights of this picturesque city. The tour begins by the Palace of Mirabell which was built in year 1606 and today home to the office of the local Mayor and city offices. Then pass the Mozarteum (University of Music) one of the world's most prestigious music academies. You will arrive in Markart Square with the Landestheatre (The Regional Theatre), The Trinity Church and Mozart's Wohnhaus (Mozart's Residence), where the composer lived for many years. Crossing over the Salzach (Salt) river you will have a wonderful view of this magical city. You will pass by the Law Courts on the way to the Hellbrunn Palace where you will have a short photo stop. Hellbrunn Palace was built at the start of the 17th century to the design of the great architect Santino Solari and used as a hunting lodge and weekend residence by Salzburg's Archbishops. On the way back to the city centre you will pass by the Palace of Frohnburg and the Nonnberg Abbey, situated beneath the impressive Hohensalzburg Fortress, before entering the heart of the city through the Siegmunds Gate. Once in the old city you will pass by the Festival Halls, Old University, Horse Pond, Getreidegasse and the Blasius Church. The tour finishes in Mozart Square where you will see the famous Mozart statue and the Cathedral.

During this tour we will introduce Prague as a historic and architectural jewel of Central Europe. Our guide will be with you the whole time, explaining the history of Prague and its neighbourhoods (Old Town, New Town, Lesser Town) during the bus trip. The second part of the tour will take you to Prague castle and to one of the most most important sight of Prague on a visit inside the nearby St Vitus Cathedral . After approximately 60 minutes of guided walking tour you go to the bank of the Vltava River to get on board a boat where you can take a rest and relax admiring the beauties of Prague from a different view. Besides other bridges connecting both the river banks you will see the well known Charles Bridge from the boat. Then continue for a pleasant walk through the Jewish town to the Old Town Square (Prague Astronomical Clock and Tyn Cathedral) where the tour ends.

No plans for the evening? We would be pleased to welcome you on board our restaurant tour boat, which we will bring you by bus. During our three-hour cruise, you will enjoy dinner and live music. During the tour, a guide will be available the whole time to provide information about the beautifully lit monuments on either bank of the Vltava River as you pass by them. Of course, there is a bar with a wide assortment of alcoholic and non-alcoholic beverages and pleasant serving staff. The tour includes a short drive through Prague in an air-conditioned bus to show you round the most beautiful places of the Old Town, the Jewish Quarter, the Lesser Quarter and New Town. After the cruise, we will drive you back to your hotel.

During your visit to Prague you should not miss the large Gothic castle founded in the 14th century by Charles IV, King of Bohemia and Holy Roman Emperor. Karlstejn served as a place for the safekeeping the Empire coronation jewels, holy relics and other royal treasures. Located about 35 km southwest of Prague in the Karlstejn village, it is one of the most famous and heavily visited castles in the Czech Republic.

Take the opportunity to visit the impressive parliament building. After a walk around Hungary's largest building you will visit the magnificent Neo-Gothic Parliament, also known as the Holy Hungarian Crown, on a guided tour through the splendid session rooms and of the impressive staircase. This is followed by a city tour. You will cross the Danube on the Margaret Bridge and drive to the Royal Castle on the Buda side of the city. Here you will have some free time to yourself to visit the Fishermen's Bastion, which offers stunning views over the city and the Matthias Church. Our tour will continue to Gellert Hill, before crossing the Elisabeth Bridge and driving towards Heroes' Square. Passing by the Opera and St Stephen's Basilica we reach the Hotel Intercontinental, where this tour ends. 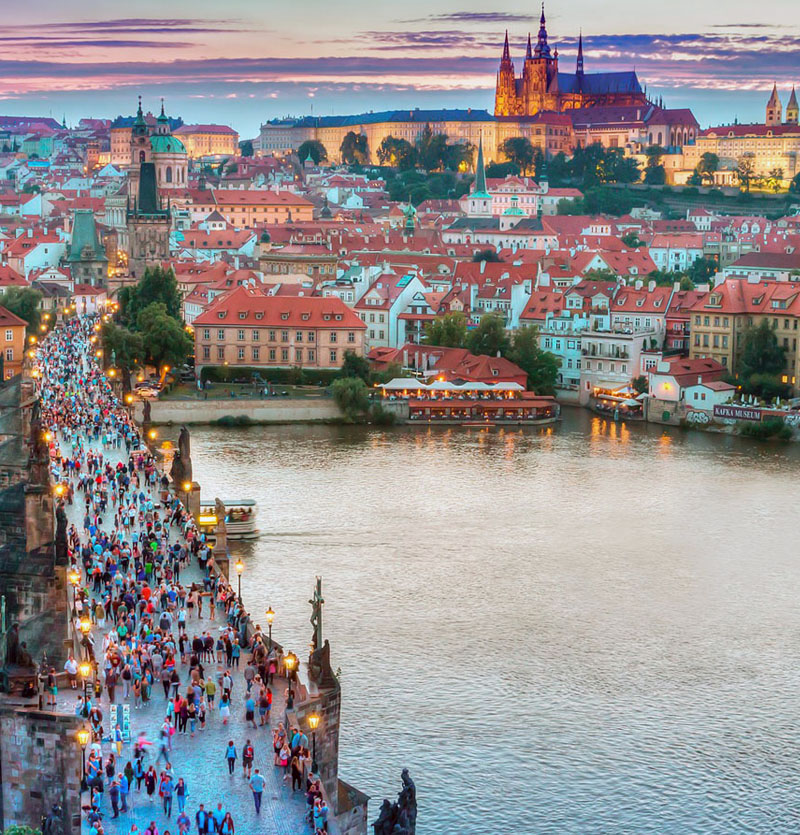